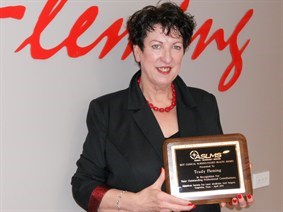 The American Society for Laser Medicine and Surgery [ASLMS] is the most prestigious of laser organisations. Trudy attends their conference annually as it is the best way to see and hear what is happening in the cosmetic and medical laser field.

In 2011 Trudy was asked to talk at the Nurses and Allied Health portion of the conference.  Her talk was on sun exposure and laser issues.  She won the award for the best presentation that day.  This is an incredible honour as other speakers were well known and respected nurses and doctors in the field.

Trudy has certificates dating back as far as 1975.  There are many electrology qualifications from the UK and USA.  Among others, Trudy undertook post graduate study with Michael Bono, a legend in this field.  She received 1-on-1 training with him in Santa Barbara, California.   There are also numerous Laser Safety as well as clinical laser and IPL qualifications.  Trudy has studied and received training in the UK, USA, Denmark and Sweden.  She has also received training from Slovenian and German trainers as part of her ungoing education on European laser devices.